Celiac disease: an infographic to understand 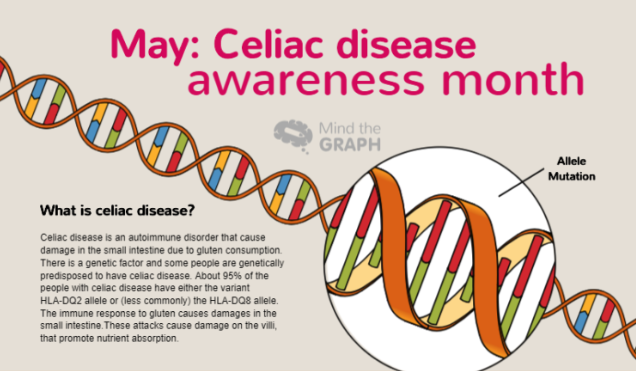 May is the celiac-awareness month, a date to call attention to celiac disease. Researchers from all around the world study celiac disease every day, seeking a better quality of life for their patients. And much has already been discovered.

Therefore, in addition to research and solid data, good communication between scientists, media and general people is important. Fake news, wrong or incomplete information can make life very much worse for those who have the disease or are in the diagnostic phase. We believe that good communication in science is very important for advances in scientific knowledge and in the well-being of the general population.

One way to improve science communication is to use of visual resources, as infographics, videos or graphical abstracts. You can show your data in a concise and beautiful way.

Our team made an infographic to show information of the celiac disease, based on scientific research.

First of all, what is celiac disease?

It is an autoimmune disorder that cause damage in the small intestine due to gluten consumption. There is a genetic factor and some people are genetically predisposed to have celiac disease.

When people with this disorder eat gluten (a protein found in wheat, rye and barley), there are an immune response by a reaction to gliadins and glutenins (gluten proteins) that attacks the small intestine cells . These attacks cause damage on the villi, that promote nutrient absorption. The damaged villi become shortened and eventually flatten out, so nutrients cannot be absorbed properly into the body.

What needs to change if you have a celiac disease?

There isn’t cure for celiac disease. Therefore, the most common treatment is lifelong adherence to a strict gluten-free diet that help manage symptoms and promote intestinal healing.

Why we need a celiac awareness month?

It is estimated that celiac disease affects 1 in 100 people worldwide.

There are millions of people undiagnosed.  Many of its signs and symptoms are nonspecific, which means they may occur in many disorders.

On average, a diagnosis is not made until 6 to 10 years after symptoms begin. This is a problem due to risk for long-term health complications.

Some people have silent celiac disease, in which they have no symptoms of the disorder. However, people with silent celiac disease do have immune proteins in their blood (antibodies) that are common in this disease. They also have inflammatory damage to their small intestine that can be detected with a biopsy.

If you are concerned to have celiac disease, go to your doctor. Only a physician can make a proper diagnosis.