Brain damage: an infographic to understand the new Nature paper

Scientists from Yale University kept pig brains alive outside body for hours after death. The paper Restoration of brain circulation and cellular functions hours post-mortem explains the experiment using pigs brains, that can brings light to brain damage research. The Nature magazine published the paper on 17 April. “For most of human history, death was very simple,” […] 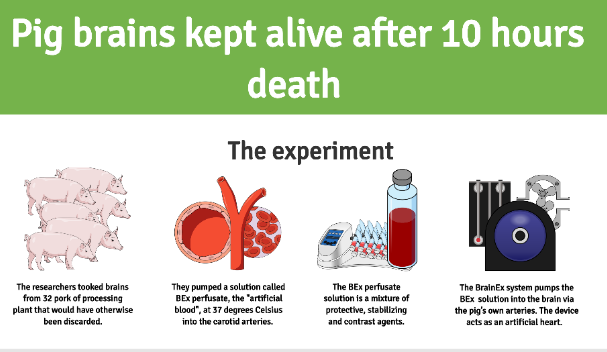 “For most of human history, death was very simple,” says Christof Koch. He is the president and chief scientist of the Allen Institute for Brain Science in Seattle, Washington. “Now, we have to question what is irreversible.”

There isn’t any communication between the neurons in these brains, so there was no consciousness. But the cells were alive — and that alone is a very big discovery.

“Previously, findings have shown that in basically minutes, the cells undergo a process of cell death,” said Nenad Sestan, the Yale neuroscientist who led the research during a press conference. “What we’re showing is that the process of cell death is a gradual step-wise process, and some of those processes can be either postponed, preserved, or even reversed.”

According to Nature Magazine, the researchers tested how well the brains fared during a six-hour period. They found that neurons and other brain cells had restarted normal metabolic functions, such as consuming sugar and producing carbon dioxide. Also, the brains’ immune systems seemed to be working. The structures of individual cells and sections of the brain were preserved. In contrast, cells in control brains, which did not receive the nutrient- and oxygen-rich solution, collapsed. And when the scientists applied electricity to tissue samples from the treated brains, they found that individual neurons could still carry a signal.

The scientists created a system called BrainEx, specially designed to attenuate some of the processes responsible for degradation of tissue in postmortem brains. The system involves pumping a solution called BEx perfusate. The solution is a proprietary mixture of protective, stabilizing and contrast agents, that acts as substitutes for blood. The perfusate also contains chemicals that stop the oxidation of body tissue, that stops apoptosis. It also contains a neural activity blocker, the purpose of which is twofold. They pumped the solution into the isolated brain’s main arteries at normal body temperature.

The researchers used around 300 pig heads from a US Department of Agriculture abattoir. After optimizing the technology, the team connected 32 pig brains to the BrainEx system. They did the connection 4 hours after the pigs had been killed, and after removing the brains from the skulls. This computerized network of pumps, heaters and filters controlled the flow, temperature and a proprietary perfusate solution for six hours.

An infographic to understand the experiment I created the infographic using Mind the Graph. If you want to use attractive scientific illustrations to reach more people with your research, you can use mind the Graph too!