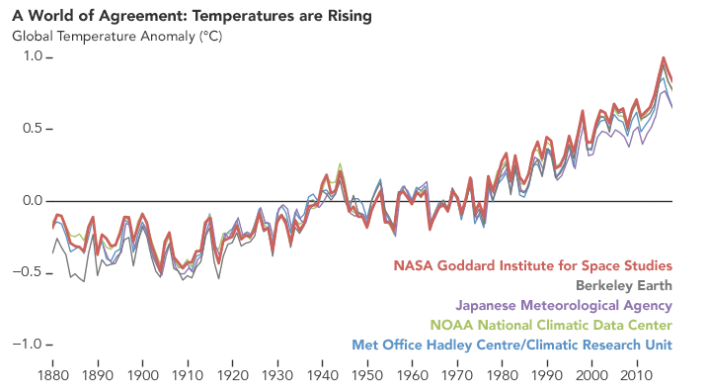 Climate change is still a controversial subject. Sometimes scientific evidences fade out faced personal opinions and polemic talks. We believe every discussion about need to be based on we already know as society, based on science. So, this post has a lot of links to scientific papers, scientists interviews and solid data. If you have any of these doubts below, science is working to answer you:

There is snow during the winter. This fact sometimes works as a statement against global warming. In 2015 an US Senator brought a snowball to the Senate floor, to “prove” global warming is a lie.

Indeed the name can be a little confusing, but the snow is NOT an evidence against global warming. In fact, extreme temperatures are a strong evidence that things are changing. We are loosing the soft temperatures. There is plenty scientific data that shows how the planet temperature is increasing over the years.

To understand that, we need to know the difference between climate and weather. Climate is a long-term average while weather is what we check when we want to go to the beach for the weekend. Which means, weather occurs in a temporary scale. We keep seeing snow in the winter. And global warming is happening.

A new paper published on Nature show how since the late 20th century, temperature rises have been the most rapid in the past two millennia.

02. There isn’t a consensus among scientists about human impact on climate change.

When denialists say that there is not a scientific consensus about climate change, many people can think that there is a 50-50 fission about how humans impact the climate change. Something like “Each side has their scientists”. However, 99% of the scientists agree that we are causing global warming, according to The Guardian and NASA. At least 18 scientific societies in the United States, from the American Geophysical Union to the American Medical Association, have issued official statements on climate change. Among climate researchers we already answered this question. We are causing it. Now we need to move on to the next questions, as is it possible to stop it?

03. It is just another natural cycle. It happened before.

Yes, we all watched Ice Age. And we know that planet Earth is an old soul that went through a lot, including extreme temperatures. So, the current climate change could be a natural process right? We just are living during another cycle. Well, it could be, but this is NOT what the newest scientific data are showing.

The sun:  The energy from the sun has been going down, not up, so if changes in the sun’s energy drove our temperature, we should be getting cooler, not warmer.

Pre Ice Age: Some people say that the planet is warmer because we are recovering from the last Ice Age. But what causes these Ages are the Earth’s orbital cycles. And according with our planet cycle calendar, we are supposed going to another Ice Age, not a warm one.

Volcanism: Volcanos produce heat-trapping gases, so they can be the responsible for the temperature change, right? Actually, they produce less than 1% of the CO2 that humans produce. Also, big eruptions, when they happen, cool the Earth instead of warming it. The Nature paper entitled Last phase of the Little Ice Age forced by volcanic eruptions explain how the world started to move from a volcanically cooled era to a climate warmed by human emissions  during the 18th Century.

In fact, there is No evidence for globally coherent warm and cold periods over the preindustrial Common Era. Iin the past, temperature change didn’t happen in more than half the globe at any one time. Only after the Industrial Revolution the temperature starts changing globally. The paper show how “This lack of spatiotemporal coherence indicates that preindustrial forcing was not sufficient to produce globally extreme temperatures at multidecadal and centennial timescales. By contrast, we find that the warmest period of the past two millennia occurred during the 2oth century for more than 98% of the globe. This provides strong evidence that anthropogenic global warming is not only unparalleled in terms of absolute temperatures, but also unprecedented in spatial consistency within the context of the past 2,000 years.”

We need to communicate these results so they can impact our society. Let’s improve communication in science together?