Dog evolution: A scientific infographic of our best friend 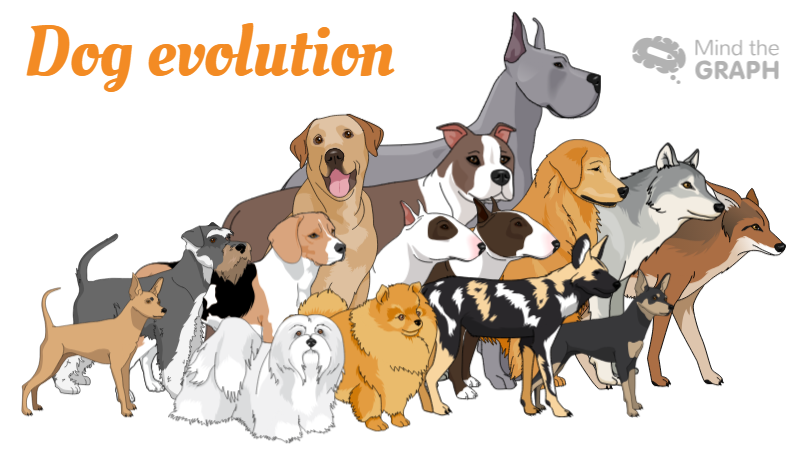 Dogs are people’s best friends and they evolved close to us when wolves and humans were trying to survive the cold winter without technology. Your pet may not look the part, but if you analyse the dna and go back far enough in the past, you’ll find that your dog, as all dogs, is descended from wolves. Gray wolves and dogs diverged from an extinct wolf species some 15,000 to 40,000 years ago.

A scientific study1  published on nature suggests that modern dogs probably descended from just one population that lived continuously in Europe. “Exactly who domesticated these wolves, when, and how many times, is still a mystery, and scientists don’t agree on the answer. Dogs were probably domesticated by accident, when wolves began trailing ancient hunter-gatherers to snack on their garbage. Docile wolves may have been slipped extra food scraps, the theory goes, so they survived better, and passed on their genes.”

However, despite scientists efforts, there are many controversies about the dog evolution. The article “How Accurate Is Alpha’s Theory of Dog Domestication?”2 brings us the latest studies on dog evolution and domestication:

“That the first domesticated animal was a large carnivore, who would have been a competitor for food—anyone who has spent time with wild wolves would see how unlikely it was that we somehow tamed them in a way that led to domestication,” says Brian Hare, director of the Duke University Canine Cognition Center. Hare adds that most wolves would have been fearful and aggressive towards humans—because that’s the way most wolves behave. But some would have been friendlier, which may have given them access to human hunter-gatherer foodstuffs. “These wolves would have had an advantage over other wolves, and the strong selection pressure on friendliness had a whole lot of byproducts, like the physical differences we see in dogs,” he says. “This is self-domestication. We did not domesticate dogs. Dogs domesticated themselves.”

Using infographics we can visualize better the evolutionary relashionship between dogs and other animals. We’ve made an infographic to show the dog classification in the Animalia Kingdom (Canis lupus).

You can create your own infographic too and show a different topic on dog evolution, you can even use our dog picture to illustrate. Nice, right? Just upload your dog image to our platform. And if you don’t find the illustration you want, don’t worry, just write to contact@mindthegraph.com and request a new one.

Are you excited to start your own infographic? Start now for free.