10 most relevant advancements in science that you must know

A list made by scientists themselves on all major advancements in science you should definitely know about. 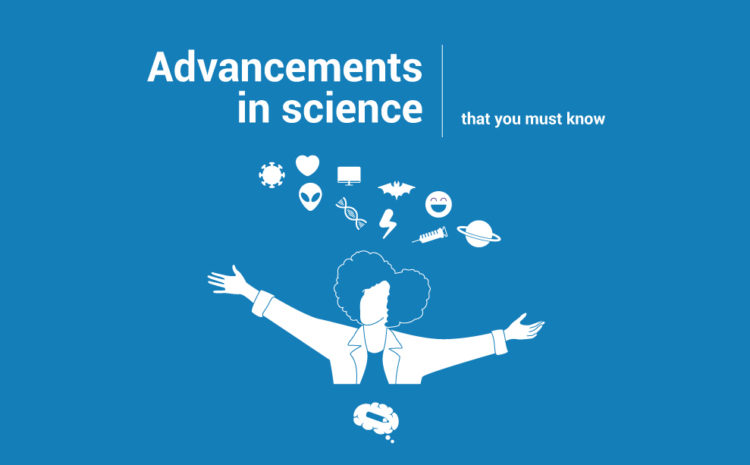 Each year, huge numbers of scientific papers are published on subjects as diverse as astronomy to climate change to the current pandemic.

In other words, it is difficult to distinguish between works that are relevant, interesting, but largely irrelevant, and junk science.

Over the past years, we have seen a number of groundbreaking accomplishments, which have often led to a true explosion of knowledge.

The following is a list of the top ten advancements in science in the year 2021, including the most notable historical discoveries and an overview of what’s to come in scientific advancements.

Advancements in science on 2021

1. Extraterrestrial life is now easier to find than ever before

A paper published in 2021 by researchers suggested that there may be a planet with life that belongs to the hycean planet category.

They described an ocean-covered, hydrogen-rich planet that is about 2.6 times bigger than Earth. The human race could not withstand such conditions, but other life forms could.

As methyl chloride and dimethyl sulphide are easier to detect on aquatic planets, biosignatures can be identified more easily.

In the next two or three decades, it will be possible to detect and confirm life on planets other than Earth.

There is a good chance that soon we will be able to discover planets with life or at least planets that could support life.

CISPR technology usually works on extracted cells in a laboratory before reintroducing them to the body. As a result, it’s a lengthy and expensive procedure, which is often followed by chemotherapy.

A patient with a rare inherited disease received an injection of the CRISPR Cas-9 gene editor in June 2021.

Transthyretin amyloidosis was successfully treated in this case, even reducing the amount of destructive enzymes in the affected tissues and organs.

3. Electric eels are some of the happiest predators

According to his findings published in Ecology and Evolution, Volta’s electric eels hunt in groups by circling around their prey and zapping them with 860 volts.

Eels can capture more fish when they hunt by group as opposed to individually.

In addition to exploring other electric eel communities in the Amazon River basin, the team is hoping to identify other hunting patterns the eels exhibit, since biodiversity is under threat.

As part of the most incredible headlines for the year 2020, the Covid-19 vaccines were developed, but they were introduced in 2021.

The first adult vaccine was rolled out by Pfizer and Moderna in 2020 December, followed by Johnson & Johnson in 2021. Children as young as five can now receive the Covid-19 vaccine.

To reach a stable position in space, it will travel nearly 1 million miles over 30 days, after which the instruments will be unfolded, aligned, and calibrated over the next six months.

Multiple delays occurred during the launch. In the coming decades, it will follow Earth’s orbit. Eventually, we may be able to discover signs that life exists on other planets.

6. The fastest quantum processor ever

Computers based on quantum technology can process information in seconds that would otherwise take multiple days or weeks on the best supercomputers.

Quantum computing exploits the laws of quantum physics for powerful computations, transforming fields such as astrophysics, IT, engineering, national security, and more. The 127-qubit Eagle was launched by IBM in November 2021.

It is a compelling quantum processor till date. The quantum computing field is now poised for rapid development.

7. Humans are influencing the evolution of animals

Directly and indirectly, humans have influenced animal evolution. Poaching activities have resulted in a sharp increase in tuskless African elephants.

During the Mozambican Civil War between 1977 and 1992, enormous numbers of elephants with huge tusks were wiped out, which meant that the most genetic material was passed on by the females without giant tusks.

Animal evolution is indirectly affected by humans owing to the increasing temperatures triggered by global warming in addition to killing animals.

The 2021 issue of Trends in Ecology and Evolution claims bigger bat wings and longer rabbit ears, which are likely to radiate more heat in their environment.

Further evidence has been published in Science Advances. Scientists found that birds from remote patches of the Amazon rainforest have become lighter and their wings have grown longer as a result of altered rainfall patterns and rising temperatures.

8. Development of an artificial titanium heart

A synthetic heart has been a goal of scientists for more than 50 years. Around the world each year, coronary heart disease causes the greatest number of deaths. BiVACOR is a titanium heart created by an Australian research team that uses spinning disc technology.

While it does not mimic the human heart, it attempts to improve upon evolution by pumping blood in a more efficient way. Human trials are still pending. Thus far, only temporary trials have been conducted on heart transplant patients, as well as on animals.

The malaria epidemic kills more than half a million people every year, making it one of the deadliest diseases on the planet.

Of those, more than half are children. A malaria vaccine for kids was approved by the World Health Organization (WHO), making it the first of its kind.

The malaria vaccine attacks the five deadliest malaria pathogens and is administered over the course of four injections. It could prevent around five million malaria cases each year thanks to this scientific discovery.

Mars was docked by three missions in early 2021, making use of Earth’s orbital alignment with Mars, which occurs every 26 months.

NASA’s Perseverance lander, equipped with instruments for drilling and storing rock samples, is scheduled to travel across Jezero Crater in the near future.

During the Sample Return mission, 43 rock samples will be retrieved and sent back in caches.

Through monitoring Mars’ daily, monthly, and yearly changes from orbit, the UAE’s Hope orbiter sought to study Mars’ past and present climate.

The Tianwen-1 orbiter visited Mars from orbit before landing the Zhurong rover in Utopia Planitia during the mission.

China was trying to test its ability to move on Mars’ surface. Scientists have been testing the capability of maneuvering through Mars’ atmosphere, which is one of the major scientific breakthroughs.

Advancements in science through history

We can now remove genes surgically and monitor their regulatory elements. This has been a major breakthrough in understanding not only how organisms work, but also the afflictions that affect them.

In several of the major application areas, studies are being subjected to clinical trials that will hopefully lead to their use in the field of medicine.

It was announced in 2017 that the age of Homo sapiens was being recalculated 300,000 years ago.  A 100,000-year extension over what was previously believed. Three hundred thousand-year-old bones were discovered in a cave in Morocco.

As a result, it was also revealed that it might not be true that our species originated in eastern Africa but spread throughout the continent instead.

The existence of black holes is known, but their darkness is also apparent because no light can reach them beyond their observed horizons.

In the course of the years, scientists were able to capture an image of a black hole for the first time.

An image of the black hole’s point of no return appears to be a glowing doughnut of gas and dust.

The research team involved in this discovery was awarded the Breakthrough Prize 2020, considered one of the world’s top scientific prizes.

We are witnessing greater innovations in science around the world as we go through decades.

Well, we aren’t too far from the next technological breakthrough, Mars colonization, and of course, flying cars!

For every paper published, figures are required to illustrate the theory. At Mind the Graph, we are dedicated to providing you with illustrations from all categories of science. Take a look at our gallery of illustrations.