Turtles and plastic A study shows that plastic pollution traps young sea turtles over time.  Infant sea turtles leave beaches to raise themselves on the ocean floor after hatching. In addition, over time, these currents have accumulated an increasing amount of plastic, which many turtles swallow as they feed near the shore.  Baby turtles, especially […] 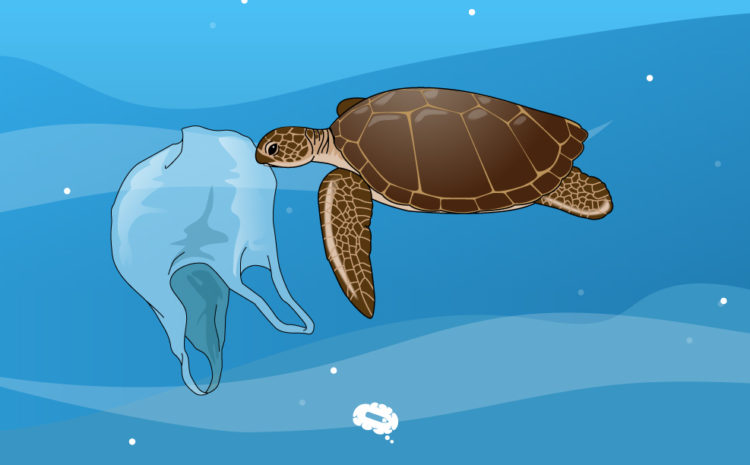 Infant sea turtles leave beaches to raise themselves on the ocean floor after hatching. In addition, over time, these currents have accumulated an increasing amount of plastic, which many turtles swallow as they feed near the shore.

Baby turtles, especially those newly hatched and those living on the ocean floor, are thought to be most susceptible to plastic pollution. Nevertheless, they experience limited access and assessments due to their remote location.

Could turtles fall into an evolutionary trap?

Marine systems have been impacted by plastic debris for years, and an attempt has been made to estimate how it interacts with more than 700 species.

Ingestion of plastics, entanglement with them, and ecosystem degradation are all threats plastic poses. There is a growing realization that marine turtles consume plastic, but no data have been found proving population-level impacts of plastic ingestion.

Marine turtles may have heightened vulnerability to environmental pollutants due to their habitat and behavior during certain phases of their lifecycle.

Except for flatback turtles, post-hatchling turtles typically live in oceanic zones, where they are usually found in low numbers in swaths of land. During the post-hatchling phase, flatback turtles rely on the coastal waters. Only on rare occasions will it delve deeper into the ocean if it feeds near high tide lines, ocean banks, or ridges that come near the shoreline. Often, epipelagic feeding is characteristic of them.

It has been shown that non-nutritive items can lead to a dilution of diet, lowering energy levels in their body, as well as causing impairment to the gastrointestinal canal, cloaca, and bladder in some species.

A study was conducted on juvenile sea turtles (both hatchlings and those that have reached the size of a 50 cm shell) that washed ashore in Australian waters or were captured by fishermen the following year.

There were 121 sea turtles in the study, five species of which were examined: the green turtle, the loggerhead, the hawksbill, the olive ridley, and the flatbacks.

On the Pacific coast, loggerheads, green turtles, flatbacks, and olive ridleys all contained plastic in far higher numbers: 86%, 83%, 80%, and 29% respectively.

There was plastic in 28% of flatback turtles, 21% of loggerhead turtles, and 9% of green turtles on the Indian Ocean coast. Seven hawksbill turtles were found on either coast, so the sample size was minimal.

Plastic was not found in any hawksbill turtles found on either coast. Pacific turtles were typically stuffed with hard plastic fragments, likely from a wide variety of human-made objects, as opposed to Indian Ocean plastics, which were primarily fibers from fishing nets or ropes.

There is no way to pinpoint the source of the fragments found since these polymers are so widely used in plastic products.

A significant source of marine pollutants near the water comes from discarded, dismantled, and otherwise trashed fishing gear (ALDFG), which are commonly made up of plastic fibers. The size of particles varied along with turtle size, usually between 5 mm and 10 mm.

Researchers are hoping to examine how plastic ingestion affects turtle health and survival at the next stage of their research. To do so, researchers and veterinarians throughout the world will need to collaborate closely.

As a perk, it is also important for us to stop dumping waste into the water bodies that are not only entangling the turtles but will act on their genetic makeup in the long run.

If you would like more details about their research, please see the reference given below.