Understand Zika virus graphical abstract: How it reduces brain size Today a research study added interesting evidence towards the role of Zika virus in the malformation of nervous tissues. Ah, yes, before you ask, human nervous tissue. This was elegantly done by the group of Dr. Stevens Rehen, an internationally-known researcher in the field of […] 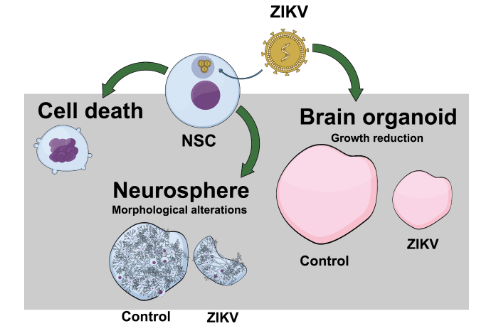 Today a research study added interesting evidence towards the role of Zika virus in the malformation of nervous tissues. Ah, yes, before you ask, human nervous tissue.

This was elegantly done by the group of Dr. Stevens Rehen, an internationally-known researcher in the field of stem cell research and, more recently, cell reprogramming.

The figure below summarizes the findings of the paper, but I will try to explain it briefly. This insightful Zika virus graphical abstract was done with Mind the graph. Isn’t is cool?

As you can see in the picture above, three distinct approaches were taken in this research. All of them confirming that Zika virus has a direct impact on how brain cells evolve to form a proper neuronal tissue, aka, “incudes brain malformation”.

Microcephaly is just one brain malformation. What the paper suggests is something even more fundamental.

They show how the Zika virus:

These are all ways how Zika virus impact neurogenesis during human brain development and cause the phenotype you see below. Why wasn’t it done before?

The groundbreaking approach was the use of induced-pluripotency stem cells (iPS cells) to be able to study virus infection in human cells.

With this process, a somatic cell harvested from a person is reprogrammed towards it’s initial state of pluripotent cell and can afterwards be differentiated into different cells, tissues, and more recently organs. This is the very beginning of “human tissue engineering “.

In the study, the authors not only used the iPS cells, but generated brain organoids, also know as “mini-brains” to understand how the presence of Zika virus impact the formation of this neuronal tissue.

Cell cultures like this are considered three-dimensional (3D) structures and provide more hints about the organ architecture. This is the year of the organoid according to the Economist. Using this innovative approach, the scientists could understand how the zika virus targets human brain cells reducing their viability and growth as neurospheres and cerebral organoids.

The paper is on pre-print in the innovative journal PeerJ. You can even comment and help the authors improve it during the process. You can see the abstract below and have full access by clicking here. Note: Two months after the pre-print on PeerJ dated March 2016, the final paper was released and, to our surprise, it was published on Science Magazine, one of the most prestigious scientific journals in the planet.

-> Read the full paper by Garcez et al in Science <- Let more people know about it sharing this post. This is a matter of global public health, as  already stated by the World Health Organization (WHO).

Know what the WHO advices about Zika virus transmission and infection:

Zika virus is primarily transmitted to humans through bites from Aedes mosquitos, which often live around buildings in urban areas and are usually active during daylight hours (peak biting activity occurs in early mornings and late afternoons).

Some evidence suggests Zika virus can also be transmitted to humans through blood transfusion, perinatal transmission and sexual transmission. However, these modes are very rare.

The incubation period is typically between 2 and 7 days.

Zika virus infection is characterized by low grade fever (less than 38.5°C) frequently accompanied by a maculopapular rash. Other common symptoms include muscle pain, joint pain with possible swelling (notably of the small joints of the hands and feet), headache, pain behind the eyes and conjunctivitis. As symptoms are often mild, infection may go unrecognized or be misdiagnosed as dengue.

A high rate of asymptomatic infection with Zika virus is expected, similar to other flaviviruses, such as dengue virus and West Nile virus. Most people fully recover without severe complications, and hospitalization rates are low. To date, there have been no reported deaths associated with Zika virus.