In this article, you will understand the polio symptoms, the many types of polio, and how it may have a long-term impact on people’s lives. 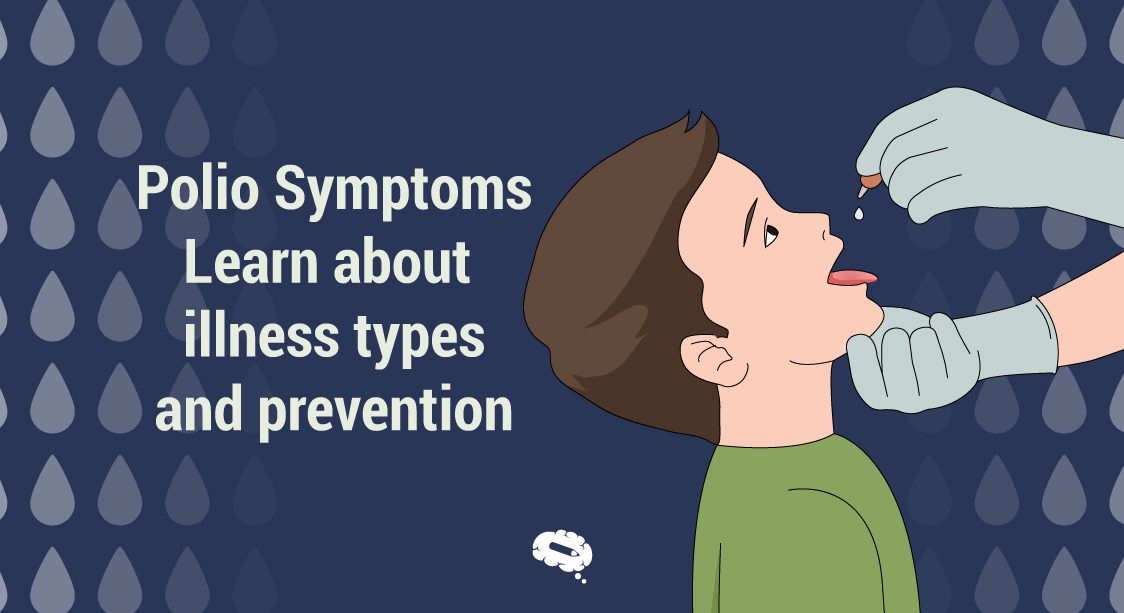 Polio is a dangerous viral infection that was formerly widespread across the world. Polio is currently uncommon since vaccination efforts are effective prevention.

In this post, we will discuss the polio symptoms, how the transmission works, the types, and how to treat it.

What is polio and how does it spread?

Polio is a contagious viral infection spread by the poliovirus. The virus travels from person to person and the majority of people experience no or minor symptoms. But in its most aggressive form, it causes nerve damage, paralysis, respiratory problems, and, in extreme circumstances, death. Lifelong paralysis of the limbs or respiratory muscles happens in less than 1% of cases. People who get paralytic with polio will die in 5% to 10% of cases.

It is transmitted by water, food, or contaminated hands. The virus lives in the throat and intestines of an infected person and it enters the body through the mouth. Although the infectious agent may or may not show symptoms, the virus is still spread.

The symptoms of all three strains are the same, however, depending on where the virus replicates and infects, polio might impact your body differently. Check out the following examples:

This is the most common kind of polio. Abortive poliomyelitis includes flu-like and intestinal symptoms. It is simply temporary and has no long-term consequences.

Some individuals who get poliovirus symptoms have this kind of polio that does not cause paralysis. This also causes the same mild, flu-like symptoms as abortive polio. However, it may induce aseptic meningitis, a swelling of the region around your brain that necessitates hospitalization.

The poliovirus causes damage to your brain and spinal cord. It has the potential to paralyze the muscles responsible for breathing, speaking, swallowing, and moving your limbs. It’s named spinal polio or bulbar polio depending on which areas of your body are damaged. Spinal and bulbar polio can coexist (bulbospinal polio).

Post-polio syndrome is a combination of debilitating signs and symptoms that can occur years after having polio.

Polioencephalitis is an uncommon form of polio that primarily affects children and involves swelling in the brain.

Infographics are great for explaining complex subjects. With Mind the Graph, you can disseminate information such as Polio symptoms and prevention methods easily. Just drag-and-drop elements and scientifically accurate illustrations to build useful schemes.

What are polio symptoms?

The signs of non-paralytic polio are the same as those for abortive polio, however, within a few days, other polio symptoms appear, such as:

Paralytic polio symptoms are similar to those of abortive polio or non-paralytic polio, but it has further symptoms that appear after a few days or weeks.

Now, if you are an adult who has not been vaccinated:

It’s important to highlight that there are no particular treatments, no cure, and no means to make polio go away faster. If you suffer from paralytic polio, you will be given physical therapy. If your respiratory muscles are weakened or paralyzed, mechanical ventilation will be required to help you breathe. If you have minor symptoms the best way to improve from the symptoms is: to drink fluids, heating packs for muscular pain, a good amount of rest and painkillers if needed.

Long-term problems due to polio

Brace issues, knee recurvatum, growing weakness caused by overuse, and ankle equinus are the most prevalent long-term problems encountered in polio patients. Approximately 40% of individuals who have had polio will see some recurrence of symptoms as post-polio syndrome.

Visual is the key of scientific information dissemination

Including infographics and illustrations in scientific study is now much easier; simply select a template from the Mind The Graph collection that best matches your needs; there are over 65,000 scientifically accurate illustrations to represent any topic you wish.