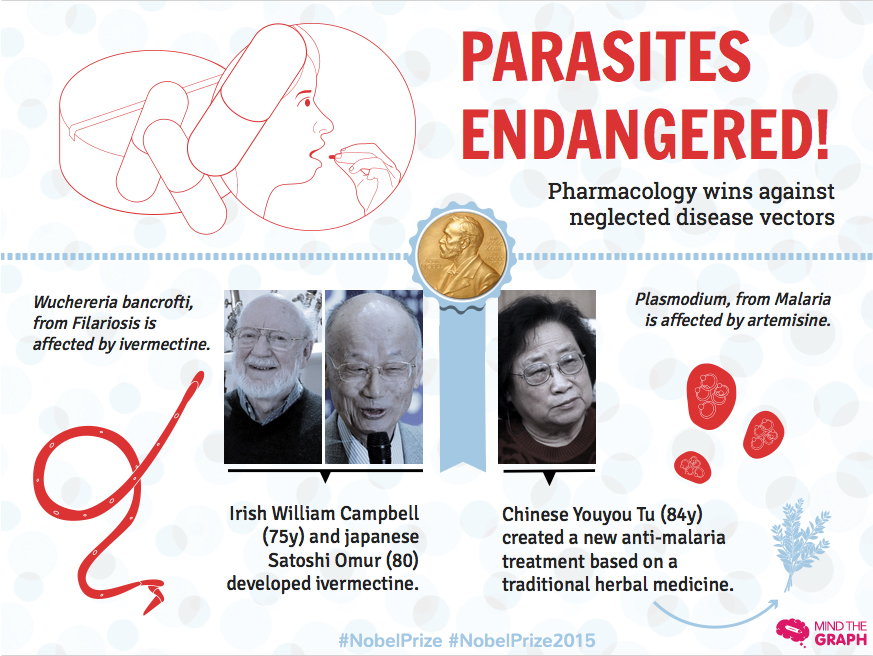 The Nobel prize 2015 in medicine was awarded to three scientists that have studied treatments for neglected diseases, such as malaria and infections caused by parasitic worms.

The Nobel prize 2015 will not be equally distributed: the Chinese researcher Youyou Tu will keep half of it, and William C. Campbell and Satoshi Omura will split the other half.

Youyou Tu have a very interesting life. Working in secrecy for the Chinese government, she had to leave her 4-year-old daughter in Beijing and went to Hainan province, she and her group investigated more than 2,000 chinese remedies. One 1,600 years old recipe had the clue to the drug artemisinin. She had drifted into obscurity despite the magnitude of her discovery of a new drug that decreased malaria mortality rates in tropical countries. Millions of lives have been saved by artemisinin.

Besides malaria, lymphatic filariasis (elephantiasis) and other parasitic worm diseases affects millions of people worldwide, and the two Nobel laurate researchers, Omura and Campbell, worked in the discovery and development of ivermectin, a new class of drug for worm infection.

The nomination of these three scientists is a welcome light to a very old problem: neglected diseases. A burden humanity have carried for too long.

What is a neglected disease?

This infographic shows the absurd proportion of disease research versus people affected by the disease, making clear that research in medicine is money-driven and don´t care enough about human suffering in poor tropical countries.

More information on neglected tropical diseases at the WHO website.