Are you too old for science?

Isaac Newton Age 45 – Published the Philosophiae Naturalis Principia Mathematica (Mathematical Principles of Natural Philosophy), which contained Newton’s Three Laws of Motion. Charles Darwin Age 27 – Began to develop a revolutionary theory about the origin of living beings Age 50 – Published the book “On the Origin of Species by Means of […] 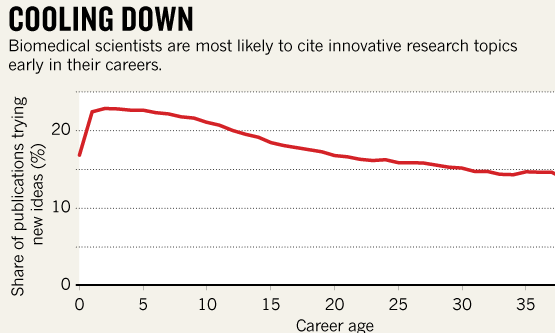 Stephen Hawking
Age 32 – Showed that black holes aren’t the information vacuums that scientists had thought they were (Hawking radiation).

Feeling the pressure of having your major breakthrough in Science already?

All four personalities are some of the most brilliant people of all times. So, one may think that their intellect is what enabled their amazing findings at a young age. However, as comforting as it sounds, it might not be true.

Actually, being young has much more to do with having great ideas than being a genius.

Being young means to be more open to new ideas; it means to be innovative and daring. Young scientists are more inclined to take in new theories or techniques, while more experienced scientists might have other concerns.

Being so, Nature has bad news (or good, depending on the point of view): Young scientists lead the way on fresh ideas.

In 2015, M. Packalen and J. Bhattacharya published a paper on the relation of age and the ability to innovate.

To collect data, the authors used MEDLINE (the leading index of biomedical research) and accessed more than 21 million publishings since 1946.

First, the authors ranked all titles and abstracts using the most popular concepts. Second, they analysed the earlier adopters of these concepts.

By doing that, it was possible to verify which scientists were more willing to embrance new ideas. And since the authors weren’t able to measure the exact age of all scientists, they used scientists career age.

Here is what they found: The research went further. The authors also analysed the combination of first and last authors.

The result gives hope to older researches: an early-career first author and a mid-career last author was the most innovative combination. Meaning that a fresh idea is better with some previous experience and knowledge. Finally, as arbitrary as this research can be, it brings up relevant questionings:

Want to be innovative?

Fabricio Pamplona is the founder of Mind the Graph - a tool used by over 400K users in 60 countries. He has a Ph.D. and solid scientific background in Psychopharmacology and experience as a Guest Researcher at the Max Planck Institute of Psychiatry (Germany) and Researcher in D'Or Institute for Research and Education (IDOR, Brazil). Fabricio holds over 2500 citations in Google Scholar. He has 10 years of experience in small innovative businesses, with relevant experience in product design and innovation management. Connect with him on LinkedIn - Fabricio Pamplona.