Darwin´s infographic and the only ilustration in his book 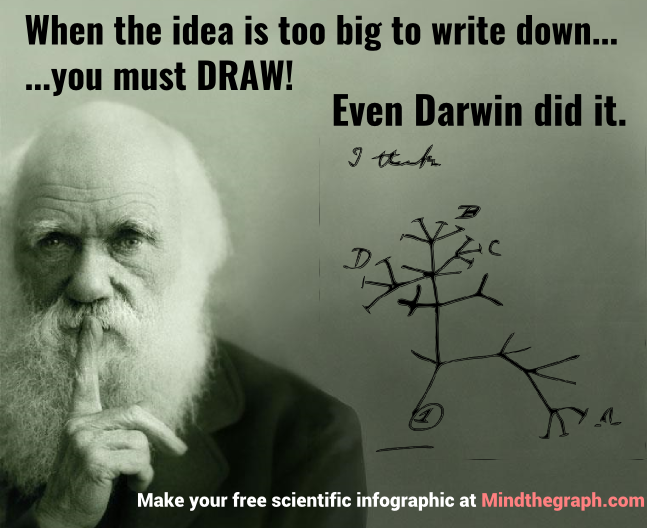 When the idea is too big to write down, you must draw. Even Darwin did it.

Darwin had one of the most important ideas of all time. He and Wallace, of course. Let’s not forget the poor guy.

What a wonderful thing it would be to know when and how he got the insight – the “EUREKA” moment of the father of natural selection.

Maybe we have that moment frozen in one of his notebooks in the form of an illustration. The famous Tree of Life sketch was made in 1837, one year after his return from the Beagle´s 5 year voyage, and editors of Darwin’s papers regard as being Notebook B the one that he had specifically dedicated to his thought, during 1837 and into 1838, on the subject of the Transmutation of Species.

We can imagine the moment, when the inspiration and the data collided in his head, and he did not have time to describe in words what he saw in his mind.

But he tried. He wrote “I think…” and then, how to explain it? How to capture the whole idea and make sure it is all there? Sometimes ideas disintegrate while you are tranferring them to the paper, like a quick rusting piece of metal.

The solution is to draw. Take a picture of your mental image and it will condense lots of information in much less lines and ink than writing. That is Darwin´s most important scientific infographic.

We can never be sure if that really happened that way, but it is a good guess to think that he was a little anxious the moment he made that tree of life, and we can guess that because in his notebooks there are very few drawings (except for the Beagle´s voyage diaries). His own most important book On the Origin of Species had only one illustration – this divergence tree:

So yeah, even Darwin made infographics. Now you come and get yours here at Mind the Graph.